Could insects be the future of food?

Did you know that two billion people worldwide enjoy insects as part of their regular diet, in over 150 countries? That’s 80% of the world’s countries! This isn’t because they are a delicacy (although many insects are considered just that) or because these people are starving (although high protein insect based products are being developed for famine situations), it’s because they are a tasty, healthy and convenient source of food. A popular theory as to why insects are not generally consumed in the West is that in the cooler regions of northern Europe and the US, insects occur in lower concentrations and are generally smaller.  This made them less efficient for our ancestors to utilise as a regular food source.

Nowadays, insects are farmed at large scale around the world.  There are 20,000 registered cricket farms in Thailand alone, and this is where we get our cricket flour for Yumpa. The expertise is certainly there and the crickets themselves thrive in tropical conditions so require less energy input than farms in cooler countries. Land and labour costs are also less than in the West. More automated processes are being brought to the insect farming industry, so in the future it will hopefully be as cost effective to source from closer to the point of manufacture of our snack bars. 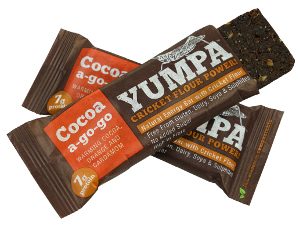 There are thousands of edible insects, each with their own unique flavour. In the West, cricket flour is the most commonly used insect ingredient. In Yumpa bars we use high quality cricket flour made from crickets fed on a diet of vegetables, grain, yeast and rice bran. Finely ground cricket flour can be added to many dishes and has a nutty flavour with an umami side. It fits well with both sweet and savoury food.  As consumers in the West become more familiar with the concept of insects as food, more and more options will become available to consumers in both shops and restaurants.

Insects are certainly going to play a large part in the future of food for our planet. Find out more at www.yumpabar.co.uk or pop and see us at our stall at the festival in May.