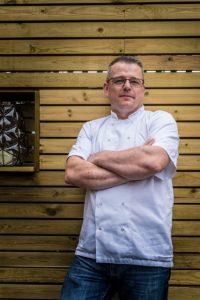 Catch Charlie in the Theatre Kitchen Marquee on Saturday 27th May from 2:20 – 3pm.

He will be making Tandoori cod fillet on a sweet potato and spinach curry. Peppercorn’s most popular (by a long way!) dish which their customers love, with people travelling to the restaurant just to have that dish!

Charlie Curran, Head Chef at Peppercorn has over 25 years’ experience in the food industry. His training began at 17 at the Thomas Danby College in Leeds and he got a foot in the catering door washing pots at Headingley cricket ground alongside his studies. Charlie subsequently moved to Reading to work as a Commis Chef at Pincents Manor, continuing in the same role a year later at Herefordshire’s Brockencote Hall for a 12-month stint. The north beckoned once more and Charlie progressed to become Chef de Partie at Leeds’ Haley’s Hotel for 18 months before the arrival of his big career break – a role at chef Brian Turner’s London restaurant.

Under Turner, Charlie worked his way from Chef de Partie, up to Sous chef and finally Head Chef during his five years with the TV favourite. Head Chef role under his belt, Charlie made the journey back up north and worked at a number of establishments including Milano’s in Sheffield, Haley’s in Leeds, the Leopold Hotel and 543 in Sheffield – the latter where he met General Manager Kelly Ware.

The couple moved onto a joint venture running the Samuel Fox at Bradwell, Derbyshire where Charlie held two AA Rosettes and a Good Food Guide entry before the owners put the building onto the market.

Along with Kelly, Charlie likes to spend his free time eating in other establishments and taking inspiration from things he sees. He is inquisitive when it comes to learning new techniques and enjoys challenging himself to make things different with creative twists.

Peppercorn Restaurant has now been running for three and a half years and how time has flown, he must be having fun!!